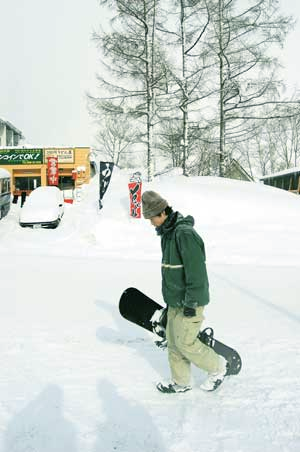 With dismal weather forecasts at home, Australian skiers are finding their rites of passage in the little village of Niseko.

Towards the east, the peaked volcano of Mount Yotei is swallowed up in darkness and the surrounding wilderness has disappeared with the sunlight leaving nothing more than a big black hole in the distance. In the foreground, white puffs of cotton-wool-like snowflakes make their graceful descent through the silent atmosphere, landing on the big, fluffy, white doona of snow already covering the ground.

A smattering of flakes end their journey unwittingly on the slanted rooftop of Hanks Bar, a small shack top-heavy with snow so thick it seems to crawl over the eaves in voluptuous mounds and hang there, defying gravity. A haze of smoke billows from the chimney, pushing its way past the falling flakes into the night sky.

Inside, the warmth of a fire turns cold cheeks rosy and noses crimson and showers the small cavernous room, lined in timber and covered with postcards, in a golden glow. The atmosphere is welcoming and emboldening so that most visitors forgo the small collection of stools around the bottle-lined bar and head straight to the central fireplace.

Sidled up to the fire, Hank, the Japanese owner who bears a striking resemblance – both in looks and manner – to Mr Miyagi (the wise and sharp-witted teacher in The Karate Kid trilogy), is preparing yakitori. This Japanese method of cooking skewered meats and vegetables over a chargrill has the punters licking their lips.

Whole sardines, fat sausages and quivering shitake mushrooms are passed around straight from the flames and washed down not with hot sake, the traditional winter accompaniment to yakitori, but with Asahi Super Dry. The sake might come later.

The scene looks and feels very Japanese but, in fact, it’s a slow-drawl “strine” accent that fills the cosy interior, the same accent that rebounds around the slopes of this Japanese ski resort where the mob from Down Under make up a surprising proportion of the population. Hanks Bar happens to have the closest thing to a cold beer and a barbecue, which is a powerful combination for any Australian. It almost tops the powder snow.

Australian boarders and skiers consider a trip to Niseko, in Japan’s northernmost isolated island of Hokkaido, as something of a rite of passage. The season-average 14 metres of powder snow is talked about in almost reverential terms. Tim Goodwin, of Essendon, and Brendan Cashman, of Kensington, were two in a group of seven mates who went to Niseko on a whim back in February 2001.

“In short, it blew my mind,” says Cashman. “We had a 50-centimetre dump when we arrived – then three days of sun, which is rare and then, for the next seven days, it did not stop snowing – seriously did not stop and we hit minus 20.”

Goodwin, who has snowboarded in Canada, New Zealand, the US and Czech Republic, agrees.
“It was quite possibly the lightest, driest, best powder I’ve boarded; great back country and local mountain workers who didn’t give a fig where we went.”

When Goodwin and Cashman were carving up the slopes, there were certainly fewer Western faces. But, thanks to a locally based pool of Australian businessmen and investors – not to mention that direct flights from Cairns to nearby Sapporo fall in the same time zone – the number of Australian visitors is growing each year.

Last season (December-March), the figure touted was 15 per cent, but, due to an Aussie propensity to stay longer and perhaps party harder, it can feel like they outnumber the locals.

He has a point.
In Niseko, onsen range from simple hotel mineral baths to luxurious pools. At Niseko Grand Hotel, one of the few mixed-gender onsen, snowflakes melt just as they hit steam that rises in great wafts from the outdoor rock pool. There are separate male and female changing rooms, but the onsen tradition is considered a great social leveller. All that protects bathers from baring all is a small white modesty towel used to cover your bits as you submerge.

The other essential ingredient, mostly for gaijin (foreigners) unaccustomed to getting butt-naked with strangers, is cold beer, found in handy vending machines. The duo is undeniably good.

Back at Hanks Bar, the punters have a few more beers under their belt and are half expecting Mr Miyagi to catch a fly with his chopsticks. Instead, in his mild-mannered way, Hank cooks on request, pours beer and tunes out, no doubt, to discussions about today’s action on the slopes.

Strawberry Fields, the unmarked terrain under An’nupuri Gondola, is perhaps Niseko’s most talked-up area. Englishman Phil King, a seasoned French Alps snowboarder living in Port Melbourne, had his Niseko debut in January this year. He describes Strawberry Fields as an off-piste bowl, a mixture of trees and open spaces that lead into a little gully at the bottom.

“It’s pretty easy to find fresh tracks and even when it hasn’t snowed in the last 24 hours you can still find little pockets of powder in amongst the trees,” he says. “It’s impossible to get bored.”
It’s this off-the-beaten track skiing that attracts many skiers and boarders to Niseko. While Hirafu, closest to the main village, has wide-open spaces, long runs and minimal queues (perfect for beginners and intermediates), the An’nupuri, Higashiyama and Hanazono areas allow more experienced skiers to spend time exploring different tracks and off-piste terrain. A keen explorer could spend three days skiing solidly without covering the same path twice.

On the other hand, the trek around the village’s quirky bar scene is well worn. Half the fun is finding the places that tend to be hidden away in building basements or in some cases, under a mountain of snow. Entry to Gyu+, a cool little bar with a DJ and tempting cocktail list, is through a miniature Coke vending machine door that glows red in the snow.

The bizarre Ice Bar is in fact an igloo where the barman wears more ski gear pouring drinks than he needs on the slopes. At the bottom of Yummy’s restaurant and Blowhard Lodge, low-ceiling, low-key basement bars have music that’s chilled and gluhwein that is happily not so.

And for something completely different, Fatty’s is a bar in the back of a truck. The story goes that it was driven to Niseko by a couple of fun-seeking Aussies who liked the resort so much they didn’t want to leave. It has been parked there ever since.

While there’s a sense of humour about the drinking scene, the food is taken a little more seriously. Hokkaido is famous for its fresh produce and this is reflected in the number of decent restaurants in the village. While traditional Japanese favourites, sushi and sashimi, are available, the cold temperatures are far better suited to winter warmers.

At Yawaraya restaurant, okonomiyaki, a Japanese-style pancake topped with a concoction of fresh vegetables and seafood is prepared on an open hotplate. Big bowls of ramen, dunked with noodles, pork slices and bean sprouts, are the staple at Jukoh, where gyoza (Japanese dumplings) are also cheap. For a tapas-style take on other Japanese favourites, Raku’s open kitchen dishes out small plates of fried cheese and shitake mushrooms sizzling on a hotplate of garlic butter.

But the local cuisine is not the only option. Gentem serves Thai and Vietnamese food on the rug-cluttered floor of a large Mongolian tent and Yummy’s does as good a pizza as anyone on Lygon Street. Then there’s Yuki Bar. When the Ashes Series is on, a meat pie and a pot costs Y400 ($4.45).

TIPS
– Travel to Niseko near the end of January/start of February and combine the trip with a visit to Sapporo’s famous Snow Festival. This year, Australia’s business relationships with Japan were honoured (perhaps obscurely) with sculptured replicas of Flinders Street Station and the Melbourne Exhibition Building.

– Haven’t had your fair share of Hokkaido’s famous food? Don’t despair. Sapporo’s New Chitose Airport has a spectacular array of the local cuisine and most of it is available for tasting.
– Japan is one of the few Westernised countries where tri-band mobile phones don’t work. Mobiles phones can be hired on the mountain.