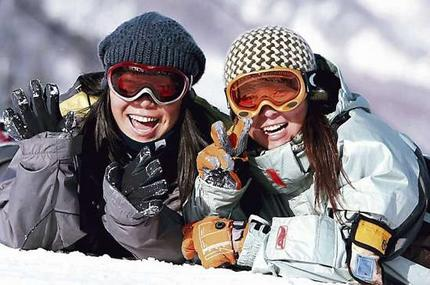 Peace out … conditions and prices are so good that many Australians are adopting Japan as their northern winter playground. Photo: Chris Hocking

Expect the unexpected when skiing in Japan. Here vending machines mid-slope serve hot Deeppresso coffee in a can, hoards of Japanese schoolchildren line up in identical ski outfits with numbered bibs and toilets play tunes while you pee.

Japan has more than 500 ski fields spread mainly over the northern island of Hokkaido and the main island of Honshu. Ski the established areas of Furano and Sahoro and you can still find powder pockets on the side of the groomed runs mid-afternoon. This is due to the rigid ski mentality of the Japanese, most of whom stick to the centre of the corduroy, skiing down in perfect formation one by one. Translated? More powder for foreign skiers.

Much of the charm of skiing in Japan is the retro aspect. Resorts such as Shiga Kogen may have high-tech groomers to rival the world’s best ski resorts but try to rent a fat ski and watch the eyes glaze over. It’s best to take your own equipment here or rent it in nearby Nagano lest you find yourself in a pastel ski suit negotiating the slopes with toothpick skis and fluoro poles.

In powder like this you want all the flotation you can get and you want to be fast so that the ski patrol doesn’t catch you in the trees – though the chances of ski patrol breaking the rules and going under the ropes is nil. Be warned: some stricter resorts will confiscate your ski pass if you are caught off piste.

Japan has built a reputation for its dry powder snow. Niseko in Hokkaido has successfully marketed its powder to Australians with 12 metres a season and gated back-country powder bowls. Hakuba Valley on Honshu combines powder and big mountain skiing in the Japanese Alps complete with a McDonald’s mid-mountain.

With so many resorts to choose from, a mere 10-hour flight from Australia’s east coast, a two-hour time difference to keep jetlag at bay plus a healthy exchange rate, Australians are adopting Japan as their northern winter playground.

NISEKO
* Who goes there Australians and lots of them. Mt Hotham’s Colin Hackworth and Roger Donazzan set up Harmony Resorts (www.harmonyresorts.com) in Hirafu, with a ski school and a guided White Room powder program.
* The mountain A good mix of beginner, intermediate and advanced with runs up to 5.5 kilometres long. It snows so much here that there are always fresh tracks to be found and if you’re looking for a challenge, hike to the peak or head to the White Room with a guide. Rental equipment is the latest season’s and swanky new apartments are everywhere.
* Sleep over Hokkaido Tracks, self-contained Western-style apartments (www.hokkaidotracks.com).
* Apres Quirky underground bars, Western fine dining, Japanese yakitori but prepare to stand in line.

FURANO
(www.skifurano.com)
* Who goes there Those looking for a standard Japanese ski experience in a country town. It’s quieter than Niseko with fewer foreigners. In the belly button of Hokkaido, the powder is even drier, if you can get to it. The ski patrol here is very strict.
* The mountain Lifts range from a 100-person ropeway car to six-seater gondolas and dinky, one-seater lifts. A mix of steeps to burn the thighs and gentler slopes on either side of the mountain for beginners.
* Sleep over North Country Inn has Western- and Japanese-style rooms (www.northcountryinnfurano.com).
* Apres The tiny bar of Kitsutsuki is tucked away in an arcade and run by an eccentric musician.

SAHORO
(www.clubmed.com.au/sahoro-w/)
* Who goes there Ideal for families, with a kids’ club, nightly entertainment, all-inclusive meals, ice rink and ski school.
* The mountain The entire mountain can be skied in a day but with so much overnight snow the runs change shape daily.
* Sleep over Club Med has single, twin and family rooms from basic to deluxe.
* Apres Club Med is self-contained with its own bar and nightclub.

RUSUTSU
(www.rusutsu.co.jp)
* Who goes there A local Japanese favourite. There’s no need to leave the resort; it has an amusement park, indoor wave pools, restaurant arcade and three mountain peaks.
* The mountain A fun mountain with something for everyone from steeps and gullies to wide open, groomed and a good mix of on-mountain cafes.
* Sleep over A 24-storey tower, two Swiss-style hotel wings, travel lodge and log cabins and cottages (www.rusutsu.co.jp/english/hotel/).
* Apres Escape to nearby Kutchan township for its famous gosetsu udon potato noodles.

ASAHIDAKE
(www.asahidakeropeway.com)
* Who goes there Intrepid skiers
* The mountain Extreme skiing Japan-style on the island’s highest mountain. This is serious, lift-access back country, no grooming. Take an avalanche beacon and thermals.
* Sleep over Shirakabaso Lodge with its private hot spring (onsen) and wooden cabin.
* Apres There are no bars in the village so make your own fun at your lodge of choice.

HONSHU
Less than two hours by Shinkansen bullet train from Tokyo, Nagano is set in the impressive Japanese Alps. The city hosted the Winter Olympics in 1998.

HAKUBA VALLEY
* Who goes there Families, big mountain skiers and boarders, Tokyo weekenders.
* The mountain Hakuba Valley is a 30-odd kilometre stretch of the majestic Alps that rise 3000 metres above sea level. The valley is home to a number of major resorts including Happo One which is steep, wide and open with excellent on-mountain facilities and big views; the groovy Hakuba 47 and Goryu Toomi with a modern lift system; Iwatake for snowboarders and Tsugaike in the national park perfect for all family members. Those seeking solitude and powder take an Evergreen Tour with Dave Enright for back-country ski touring on pristine snow.
* Sleep over Penke Panke is a well-priced Japanese family-run pension (www.penkepanke.com). Swankier folk may prefer the French-style La Neige for fine dining (www.hakubalaneige.com).
* Apres Hakuba is divided into a series of apres enclaves a short shuttle drive from village to village. Wadano village has The Pub, frequented mainly by Australians, Eccoland village has Hei restaurant for yummy Japanese fusion cuisine and there is karaoke in private rooms at Non Jays.

NOZAWA ONSEN
* Who goes there Those in the know. Nozawa Onsen is an undiscovered gem of skiing and culture, a centuries-old hot spring village where breakfast eggs and rice are boiled in the volcanic waters. Streets are narrow, cobbled and lead up the hill to the temple and Buddhist graveyard. Foot onsens line the streets to soothe ski boot-weary tootsies and hospitality is high.
* The mountain More than 50km of tree runs, open bowls, moguls, super-groomed and powder-perfect runs with one run of 8km from top to bottom. The views are breathtaking.
* Sleep over When in Japan, and especially Nozawa Onsen, experience the Japanese way of life and stay in a ryokan. Sakaya Ryokan and its sister property Kiriya Ryokan have private onsens for guests, tatami mat rooms and gourmet Japanese dining nightly.
* Apres Don’t expect the nightlife of Niseko but venture to the basement haunt of Stay Bar for bourbon-based cocktails and the occasional singer.

SHIGA KOGEN
(www.shigakogen.gr.jp/english/)
* Who goes there Japanese school groups and week-long snow tourists.
* The mountain You need a week here to explore the 21 linked resorts that make up Shiga Kogen. Snow-laden conifers known as “snow monsters” line the runs, there are both night skiing and an excellent Austrian-style ski school linked with ski schools in the Tyrol.
* Sleep over Chalet Shiga is owned by a local Japanese and former Thredbo ski school instructor and the first lift of the day is a moment’s walk away.
* Apres The Snow Monkey onsen is a short drive away and great for watching the troupe of monkeys that live by the hot springs. Shiga is not known for its night life but there are a handful of restaurants and some hotel bars. Best concentrate on the skiing.

NEED TO KNOW
The Japan ski season is from November to May.
Japan Airlines flies direct from Cairns, Brisbane, Sydney and Melbourne to Tokyo, with connecting flights to Hokkaido, https://www.au.jal.com/aul/ja/.
Travelplan (www.travelplan.com.au), Value Tours (www.valuetours.com.au) and Ski Japan Holidays in association with Japan Specialists (www.japanspecialists.com) have package tours including flights, lift passes, accommodation and some meals in most ski areas of Japan.