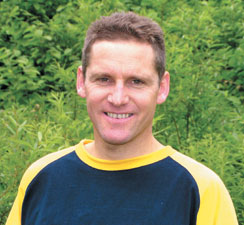 “I had nothing.” That’s what Australian Scott Walker, owner and operator of Scott Adventure Sports (SAS), had to say about his first days in Japan eleven years ago. Hard to believe when you consider the towering stacks of yellow SAS rafts and the hub of activity around his headquarters at the Hirafu resort area of Niseko, Hokkaido.

When did you come to Japan—and why?
“March 24, 1994,” said Scott, recalling the exact date. He came on a working holiday and soon was hustling around Sapporo teaching private English lessons and working at language schools to support hitchhiking trips to Niseko. “I was there almost every weekend,” he said. After three years of scraping by and facing the prohibitive visa troubles that so many foreigners deal with, Scott decided he wanted to live full-time in Niseko. The way to do it: start a business.

Humble beginnings
Scott spent the summer of 1997 living and working out of the shed that housed his one raft. “I slept there, I ate there; I did everything there.” He had enough equipment for two boats so that morning and afternoon customers could all have a fresh drysuit. He bought four more boats the next year and toward the end of the season, a film crew and writer from a travel and adventure magazine came out and did a spread—and according to Scott, that was a huge break.

That first winter, Scott made a foray into two activities nobody else was doing: dog sledding and snow rafting. He took a crash course in dog sledding on the sand in the autumn. For the latter, he simply attached a raft to a snowmobile and pulled it along the snow. After a few seasons, he phased out the dog-sledding because the snow rafting and snowmobiling were so popular.

How did the business grow?
Steady increases in the number of rafts and diversified activities were the strategy. In 2005, SAS ran over 30 boats on the Shiribetsu River and provided a host of adventure options in the summer. 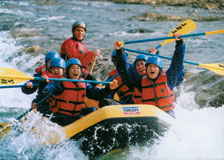 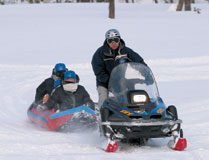 What’s next?
“Do it well or don’t do it at all,” is Scott’s business philosophy. Scott plans to level off his rafting and capitalize on the winter explosion in Niseko. At the moment, he runs a ski & snowboard school and offers snowmobiling. Scott plans to improve all three, putting them on par with some of the other winter activity operators.

What about non-adventure endeavors?
In addition to the ski rental shop and two accommodations, Australia House and Forest Star Lodge, he recently opened Bohzan, a Nepalese restaurant. All are in business only in winter and manned by his international summer rafting staff.

How’s life?
“I live in the best place in Japan,” said Scott unequivocally. “There are very few places in the world where the river is so close to an established resort,” he said, and went on to talk about a canyoning course he found less than an hour from Hirafu. And of course there’s the snow, which Scott feels makes Niseko “the number one ski resort in Asia, in the same class with Whistler.” Not a bad place to be.

Scott is still hustling. He works hard to push all facets of his company, but there is no doubt that it has paid off, which is why he was able to remember fondly his arrival in Japan, repeating the quote toward the end of our conversation. “I had nothing,” he laughed. “Absolutely nothing.”

Annupuri Oasis Lodge is a bed ‘n breakfast style accommodation option located in Annupuri Village, part of the wider Niseko area. Only 5 minute walk away from the main gondola and sitting within its own virgin forest, Annupuri Oasis Lodge offers the best value for your money.

Australia House has 12 nicely furnished bedrooms and each with their own programmable gas heater, for the coziest of sleeping conditions. Other features are Free WiFi internet access, tunning bench, Common Lounge area with large Screen TV, seperate kitchen for customers use.
Share Post: