by Rachael Oakes-Ash
From: www.smh.com.au 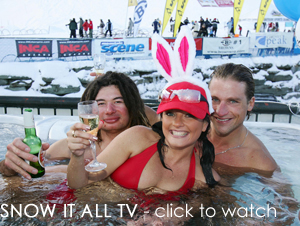 To some snow hounds, apres equals sex. If they got some then the town rates high on the apres-metre. To others it’s about the variety of bars despite the fact the drink of choice remains the same, Jaigermeister. Loved up couples on tour, meanwhile, insist it’s about an open fire, bottle of red wine and some shag pile carpet which is why you rarely see them.

Apres is all about sharing the days ski tales, boasting about fresh lines and swapping war stories from trips gone by. It usually involves a happy hour of some description and where you’ll find happy hour you’ll find ski instructors begging for booze from worn out clients.

Miss Snow It All has put together her own top ten apres destinations, ski instructors are optional…
Little Miss Snow It All doesn’t kiss and tell but she will reveal that some of her best apres moments have been in little known ski towns with not much more than a lift hut that doubles as a pub with bunks filled with kwirky locals. Who said you need a hundred bars and street lights to have a memorable party?

Craigieburn in New Zealand has one bar, it’s in the overnight lodge and runs on a generator. They have one rule to stay open late, there must be eight or more people drinking which results in some hilarious games of tag when more than one of nine need to relieve themselves. Despite these restrictions, or perhaps because of them, this clubfield boasts a nightlife within it’s four walls equal to Queenstown’s one square kilometre.

But apres is really all about the people you meet. Locals with bizarre nicknames that beg a question and come with a story, folks you skied with at ski school during the day, the host from your lodge or a friend of a friend’s third cousin you managed to track down in some basement bar.

Miss Snow It All has drunk shots with the Austrian ski team at Forest Lodge in Methven, met a future lover over Medos honey vodka mid week at the Projection Room in Ohakune and even had a cocktail created and named after her by the Spire Bar in Queenstown. It’s called Rachael’s Undoing, named so because after two of these Miss Snow It All comes undone.

I’m not saying Miss Snow It All’s a Betty Ford contender, she just enjoys her apres. That said, here’s her pick of the world’s best apres destinations.

1. Aspen, Colorado. If you can’t find fun here then you’re not looking hard enough. Start at the Sky Hotel for 5pm happy hour or ski into Little Nell on the last run of the day for complimentary canapÃ©s with your hot toddy. Jimmy’s for cocktails, D19 for more of the same and the Caribou Club for cougars on the prowl. Be warned, people have known to fall in love in Aspen.

2. St Anton, Austria. Dance with your ski boots on, it’s de rigeur, you won’t be gong home to change. It’s high on the “pick-up-o-metre” if you’re into Austrian ski instructors who believe god wants to be them. One Aussie instructor told me recently his boss at his Austrian ski school told him “you must sleep with the ugly ones, they fat ones, the older ones, not just the pretty ones, they’re all business to me.” Hmmmm, boss or pimp? Instructor or gigolo?

3. Queenstown, New Zealand. The 120 licensed establishments in this lakeside town are brought to you by the letter “B” where it’s impossible to drink your way through the alphabet. Boiler Room, Bunker bar, Bar Up, Bar Code, Barmuda, Bardeaux, Bar 12, if the bar doesn’t start with B it’s not worth going into.

4. Club Med ski resorts. Whether it’s Sahoro in Japan, Crested Butte in Colorado, Val D’Isere in France if you want guaranteed apres hilarity then choose from a host of Club Med ski villages around the world. The GO’s (gentile officer) are paid to show the GMs (gentile member) a good time. Translated? The staff party with the guests, if guests aren’t having a good time the staff don’t have a job.

6. Argentina. Doesn’t matter where, though Bariloche is considered the pick and Argentinians considered the best looking race in the world. Apres in South America kicks off at 11pm for dinner with dancing from 1am. Don’t expect to get first lifts.

7. Val Gardena, Italy. Italian mountain culture, historical postcard ski villages and home town hospitality set amongst limestone cliffs. Italians love to party with everyone, it’s impossible to feel left out so go along for the ride.

9. Nozawa Onsen Fire Festival – regular readers will know I have Nozawa mentionitis but come mid January during the fire festival there is no other ski town you want to be in. Picture an entire village drunk on sake, a bonfire and a three story burning effigy with 42 year old males strapped to the top and 25 year old males fending off wild townfolk brandishing flaming torches. Top tip – don’t wear synthetics.

10. St Moritz, Switzerland. Horse racing on a frozen lake, Cartier polo on that same lake, a wealth (pun intended) of ritzy (pun also intended) restaurants and bars on and off the mountains. Take your Black Amex, you’ll need it.

Do you agree or disagree? What bizarre, fun, outstanding, hilarious apres snow experiences have you had at home and around the world? What makes a good apres destination?

Tell Miss Snow It All, she’s listening and watch Snow It All TV to see what others have to say.